The paper is devoted to discussion of the prospects of simplified 2D hydrodynamic model use aimed at forecasting the wind-induced sea level fluctuations within the area of sea ports (Chornomorsk, Odesa and Yuzhnyi) of the Odesa Region in the North-Western part of the Black Sea. Spatio-temporal variability of wind conditions at the sea-atmosphere division is specified based on the data of the global numerical weather prediction model of the Global Forecast System (GFS). The research includes the description of the mathematical structure of the hydrodynamic model and the results of its adaptation to the conditions of the simulated sea area. It presents the results of model verification in the version which implies adoption of wind data from the archives of GFS-analysis and GFS-forecasts for 2010, 2016 and 2017. The verification was performed by comparing wind-induced denivellations of the sea level at the ports of Chornomorsk, Odesa and Yuzhnyi calculated over the course of modelling and those established on the basis of observational data (with the discreteness of 6 hours). A quantitative assessment of the calculation accuracy was performed for the cases where, according to the observational data, level denivellations exceeded the value of the standard deviation for the entire series. New series of the observed and calculated model-based significant wind-induced denivellations of sea level were formed for each of the ports from the sets of samples that met this condition. Using  these series estimates of the mean square error of the calculations, allowable error of calculations, correlation coefficient between the actual and calculated values of the level denivellations, the probability of the calculation method under the allowable error were obtained. It was established that in the case of use of the data from wind GFS-analysis (with spatial resolution of 0.5° both latitudinally and longitudinally) over the course of modelling the probability of calculation of significant sea level denivellation constitutes 84-85%, and in case of using the data from the GFS-archive of wind forecasts (with spatial resolution of 0.25°) – 88-91%. This allowed making a conclusion that the model has good prospects of use for operational forecast of the sea level fluctuations caused by storm wind in the version implying assimilation of the predicted information on the spatio-temporal variability of wind conditions obtained by means of the GFS global weather forecast model. 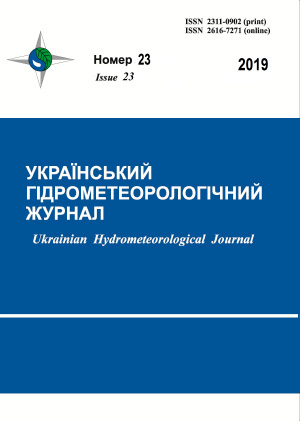